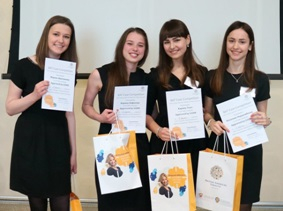 There were 70 teams from across Russia willing to participate in the competition but only 5 of them got into the finals.

The winner of the competition became a team of 4 students of the Graduate School of Management of Saint Petersburg State University! The team Approved by GSOM is represented by 3-year students (from left to right in the picture):

We congratulate our students and wish them best of luck in the forthcoming contest!