The Graduate School of Management of St. Petersburg University has again improved its position in the ranking of the best business schools in Europe by the Financial Times (FT)

Graduate School of Management, St. Petersburg University, has for the third consecutive year been included in the ranking of 85 leading business schools in Europe, the Financial Times European Business School ranking 2015. Compared with 2013, GSOM has risen 14 slots in the ranking, now list at 60th out of 85 possible and remains the only Russian business school in the list of the best representatives of Business Education in Europe. 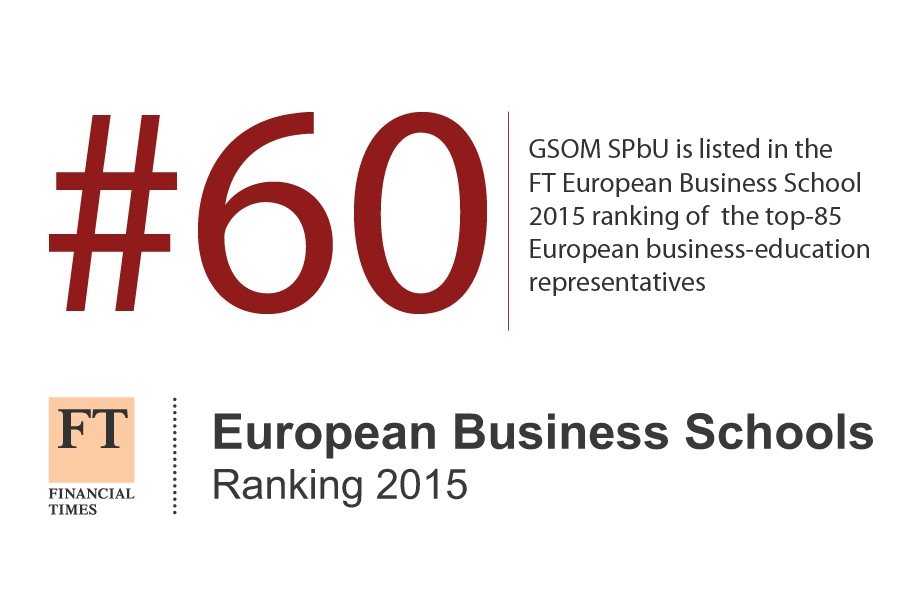 These rankings, done by the international business newspaper Financial Times, published in 24 countries around the world, are a generally accepted indicator of the quality of business schools or their individual programs. Along with the rankings of the publications Business Week, The Economist and the Wall Street Journal, FT serves as a guide for choosing a future school for many readers looking for programs such as an MBA, Corporate Programs or Master Degree studies in Management and Finance.

The FT European Business School Ranking is integrative, i.e. it evaluates the business school as a whole on the basis of the following programs:

To be accepted for the Financial Times ranking of business schools, the school must meet certain quality standards, such as being internationally accredited (by EQUIS or AACSB), and programs must have run for at least 4 years. The rankings are compiled on the basis of a significant number of criteria, one of the main criteria being the average wages earned by school graduates three years after graduation.

The targeted development of quality Master Programs in Management and Executive MBA Programs has allowed GSOM to achieve not only being the sole representative of Russia in the FT International Rankings, but has also resulted in its systematic improvement of its position in both the individual program rankings as well as the general school rankings.

All programs at GSOM are continually developed and implemented in close collaboration with its corporate partners – which are among the largest Russian and international employers and which give its students and interns the possibility of learning from international best practice. This is furthermore strengthened in the Master's Program by a semester at one of 60+ international partner schools. Each year, about 40 graduate students are given the additional advantage of being trained in international joint or double degree programs at some of the leading business schools in the world. Among them are: the 29 partner schools of the CEMS MIM, (including such schools as HEC Paris, St. Gallen, Bocconi and ESADE) as well as Double Degrees with HEC Paris and WU Vienna University of Economics and Business (holding the 2nd, 4th and 13th places respectively in the FT ranking Masters in Management in 2015) and Lappeenranta University of Technology.

The Financial Times Rankings - a tool for applicants and employers

The inclusion of GSOM in the FT 2015 European Business School Rankings reflects the international recognition of the quality St. Petersburg University’s educational programs in the area of ​​ of Management and Finance, and their compliance with the requirements of the business community. For prospective and current students it is an indicator of their employment opportunities, and that they have studied under conditions comparable to those of the graduates of the finest European business schools. For employers, it is a guarantee of the quality of the knowledge of their potential employees, the graduates GSOM.

Today, the Graduate School of Management is a unique example of the successful development of a Russian business school. In 2012, the school, as the first and only in Russia, received the coveted institutional accreditation of EQUIS. Since 2008 GSOM has annually been recognized as the best business school in Russia by the ranking EdUniversal.

Graduate School of Management was created by the order of the Rector of St. Petersburg University on January 25, 1993 as a new structural unit of this oldest (est. 1724) institution of higher education in Russia. The founding partner of SPbU in launching the Scholl was the Haas School of Business, University of California at Berkley.

During its 23 years of dynamic growth GSOM SPbU has developed 7 degree programs, which gained the reputation of being the leading in Russia and internationally-recognized. The School offers full spectrum of degree programs in management: Bachelor, Master, Doctoral programs, Executive MBA as well as corporate Executive Education.