The ability to focus on the really important: at GSOM SPbU the practice of awareness will launch

The PPP-debates “Intersubjective Transport PPP Projects – the Challenge of Time” was held on November 25, 2015 at the II Annual Conference "Transport Infrastructure of St. Petersburg and Leningrad region", which had the format of open discussion and voting on questions suggested. The moderator of the event, organized by ANO “Directorate for Development of Transport System of St. Petersburg and Leningrad Region”, was the Head of the Center for PPP Studies GSOM SPbU Svetlana Maslova. The relevance of discussion of joint transport PPP projects of St. Petersburg and Leningrad region is based on the fact, that, firstly, the transport system of these regions are inextricably linked and united by 250 thousand people moving daily from one region to other, secondly, there are wide range of perspective PPP projects in this field, for example, the construction of the line of Light Rail Transport “Sertolovo – St.Petersburg” and “Vsevolzhsk – St.Petersburg”, the Transport Hub “Devyatkino”, creation of single ticket for public transport of St. Petersburg and Leningrad region in the framework of development of intelligent transport systems, which can solve the problem of transport accessibility for residents of two regions. The PPP-debates was focused on the discussion of advantages and disadvantages of joint concession projects, problems arising during its preparation and realization, ways of its solving, as well as legal aspects of implementation of such projects.

Questions proposed to the participants for discussion and the statistics of answers are presented below.

Predetermining the fact, that the majority of the participants of PPP-debates will consider the existing legal framework insufficient to implement joint PPP projects and identify the need for regulation of this process, Elmira Kovalchuk, Head of Investment Policy and PPP Division of PPP and External Relations Department at Directorate for Development of Transport System of St. Petersburg and Leningrad Region, and Oleg Lyskov, Partner, Legal Firm “Musin, Ibragimov and Partners”, proposed to the participants the presentation of two draft legal acts regulating the interaction of executive authorities of St. Petersburg and Leningrad region: 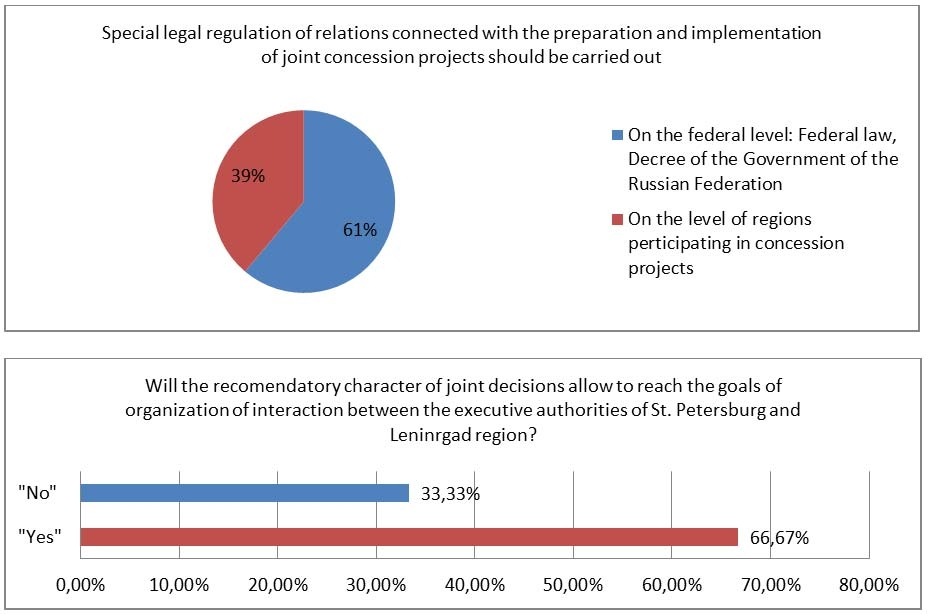 Despite the fact that the presentation concluded the project of regional legal acts, the participants of the discussion during the negotiation agreed in opinion, that the legal regulation of interactions should be implemented on the federal level too, noting that even its recommendatory character will allow to organize the interaction of authorities of two regions in the process of realization of joint projects.

The organization of interactions of executive authorities on the principle of “one window” and additional mechanisms of interactions as Working Group, the Conciliation Meeting, the Interdepartmental Commission and the Monitoring Group were also presented by Elmira Kovalchuk and Oleg Lyskov, and according to the statistics of answers were approved by the participants of PPP-debates. 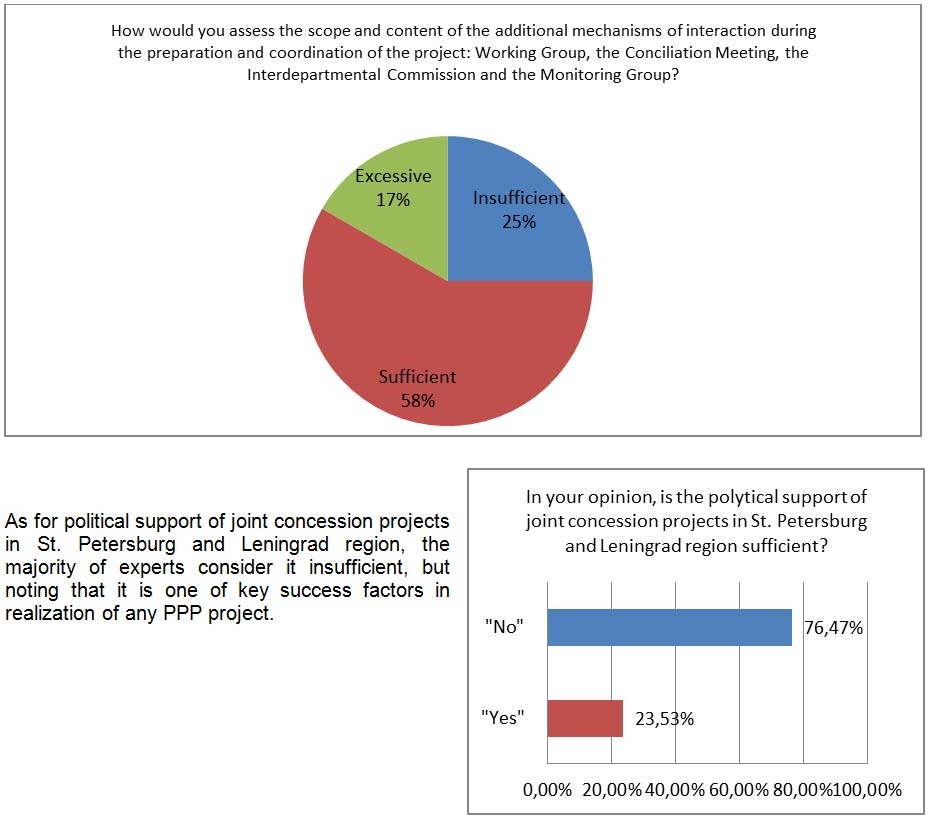 Besides multiple choice questions, questions with detailed reasoned answers were proposed to the participants of PPP debates. The experts shared their opinion on the contest of joint decisions and issues necessarily regulated there, and also they told about possible obstacles in implementation of joint concession projects and the ways to overcome and minimize them. All in all, the PPP-debates “Intersubjective Transport PPP Projects – the Challenge of Time” allowed the participant – practitioners of PPP insight into such an innovation as intersubjective PPP projects, and ANO “Directorate for Development of Transport System of St. Petersburg and Leningrad Region” – to get the opinion of the participants of the market on the further development of its innovation.