History of GSOM Family Day: how one event turned GSOM community into #gsomfamily

GSOM Family Day is the annual global meeting organized for GSOM SPbU community. For one day graduates, students, teachers, employees and corporate partners of business school № 1 in Russia have the opportunity to meet all together. This year GSOM Family Day will be held for the third time. Here is the story of this event.

The idea to organize GSOM Family Day appeared in Spring 2016. Employees of the Alumni Relations Department came up with the concept to create an event for those who participate in life of the School. As the days went by, the outline of the project began to appear on the flipchart. The event was intended to continue the idea of University meeting “Reunion”, which took place in February 2016.

It was decided that GSOM Family Day would be held at new campus “Mikhailovskaya dacha”. The meeting was scheduled for September 24. It was meant to be the first event of a new academic year. The organizers were sure that September is the best time to introduce freshmen to GSOM Family. Several months left to prepare the event.

At the begging of Summer the concept of the meeting was developed and presented at the meeting of GSOM Program Development Committee. Members of the Committee approved the idea but were not sure that it could be implemented in three months. “However they supported the project and said: Try it!” recalls the Head of Alumni Relations Department Alexandra S. Rogozhina. After the meeting it was decided not only to try but to actually do it.

The team of the first GSOM Family Day was formed by active students: Alexander Bayzarov, Lyubov Solovyova, Igor Basin, Yaroslav Kryuchkov and Roman Bourdeyny. They invited other students to participate in the organization and the work begun.

“What name should we give to this meeting?” was the first question to answer. It was supposed to unite GSOM community, its values and meanings with the family on a global scale. “Good will and warmth were expected to complement serious and businesslike atmosphere of the School”, said Program Director of GSOM Family Day 2016 Alexander Bayzarov. So the title GSOM Family appeared.

From the very beginning organizers were planning business program of the meeting. “Key speakers — that’s what has become a real challenge for us. Some of them were not able to make it, others were on vacation and didn’t answer at all. We tried to use all our resources”, said Alexandra S. Rogozhina. As a result speakers were searched everywhere: at St. Petersburg International Economic Forum, professional events, through contacts with representatives of partner companies of GSOM SPbU.

The summer was in full swing so it was difficult to work and meet with each other. Different time zones and communication problems during Skype calls complicated the process, but the work was on. “We made the strongest team. There was startup atmosphere. I think everyone remembers sleepless nights and hundreds of notifications in social networks that came in one hour and informal meetings. It was hard but after the event everyone could proudly say: we did it,” told IT Director and volunteer leader Yaroslav Kryuchkov.

GSOM community immediately showed the interest in upcoming event. The registration process begun. “We began to realize the real scale of the event. We had only a day and a half left to arrange it in the new campus”, said Deputy Head of Alumni Relations Department Kseniya V. Kolesnikova. As a result, at the first GSOM Family Day on September 24, 2016 took part 30 speakers and more than 450 participants. A year later the forum became even bigger: 43 speakers and more than 600 participants.

“We want GSOM Family Day to continue being the place for experiments and the most ambitious ideas, and we want representatives of various groups of our community to work with us on the program of this Day… Because GSOM SPbU is the place where you believe you can achieve what is important to you, and the community inspires you”, explained Alexandra S. Rogozhina.

We would like to thank Alexandra Rogozhina, Ksenia Kolesnikova, Alexander Bayzarov, Igor Basin and Yaroslav Kryuchkov for their help with telling this story. 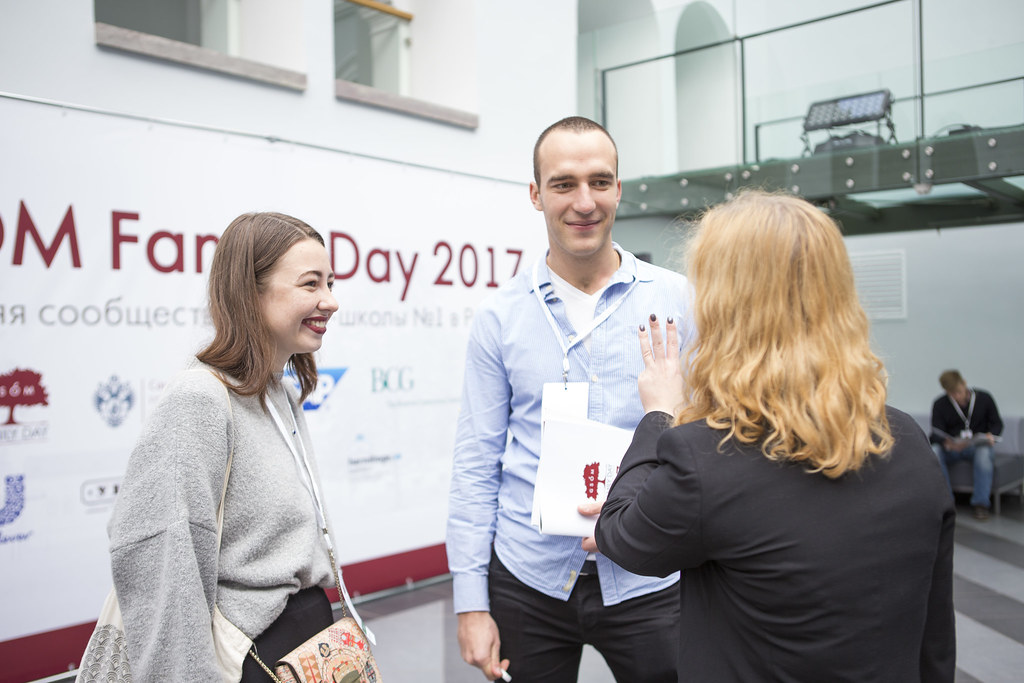