On September 20, 2018 GSOM SPbU hosted guest research seminar led by Niсk Zubanov, PhD. (University of Konstanz, Germany). The topic of the seminar was interested to many students, authors and researchers: "Market competition and the effectiveness of incentive payments".

At the seminar, Professor Zubanov presented his study on rational use of pay-for-performance (PfP) to stimulate competitiveness and increase the efficiency of company employees.

According to the theory of Niсk Zubanov and his colleagues, there are two opposing effects: business theft and the reaction of the competitor, which together create an inverted U-shaped relationship between the effectiveness of PfP and competition. Weak competition creates weak incentives to increase the efforts of the employee, because the market lacks additional capital, while strong competition creates weak incentives, as competitors react more. Thus, PfP has a strong influence on moderate competition. The report presented the results of testing this assumption through experiment in the retail network. These data confirmed the theory advanced and refuted the alternative explanations.

After the presentation of the study, a fruitful discussion took place between the speaker and the audience. The seminar was attended by lecturers, doctoral students and students of GSOM SPbU Master' and Bachelor’ programs. 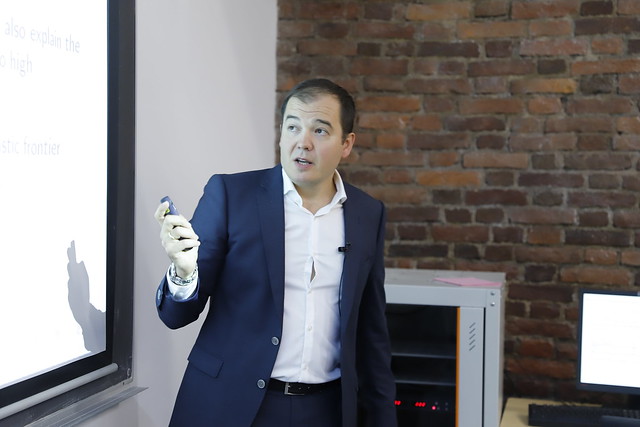