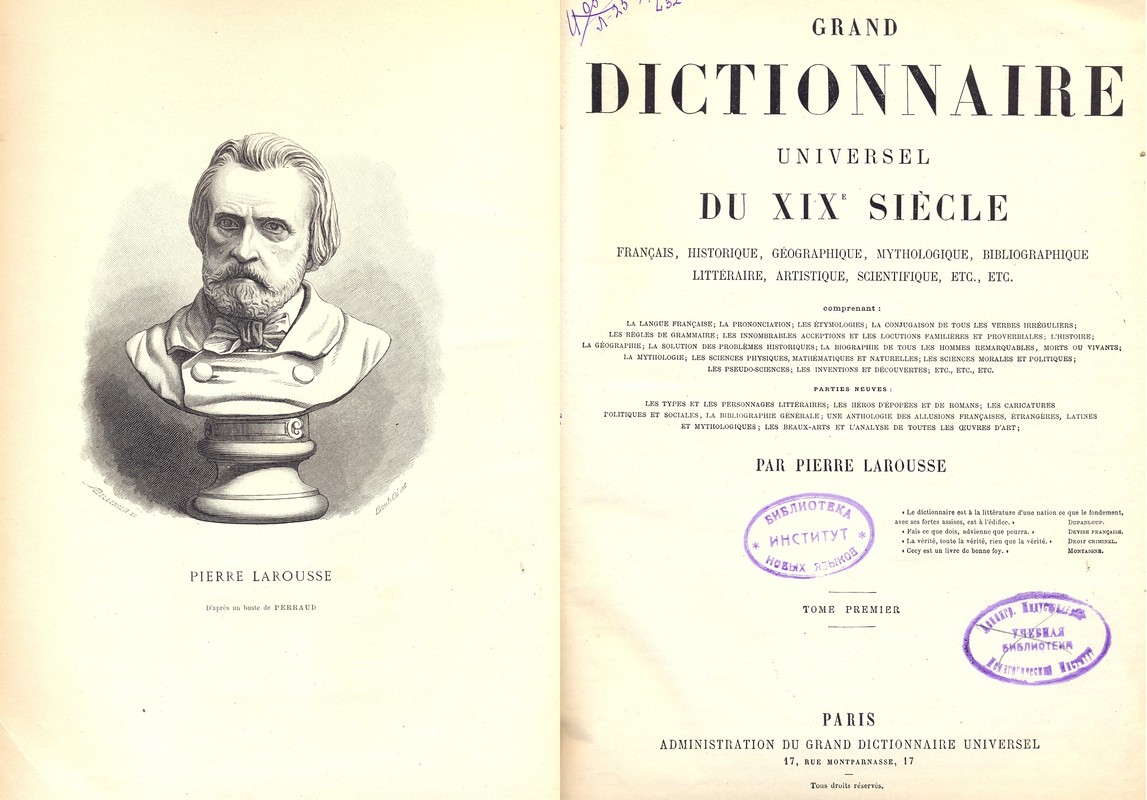 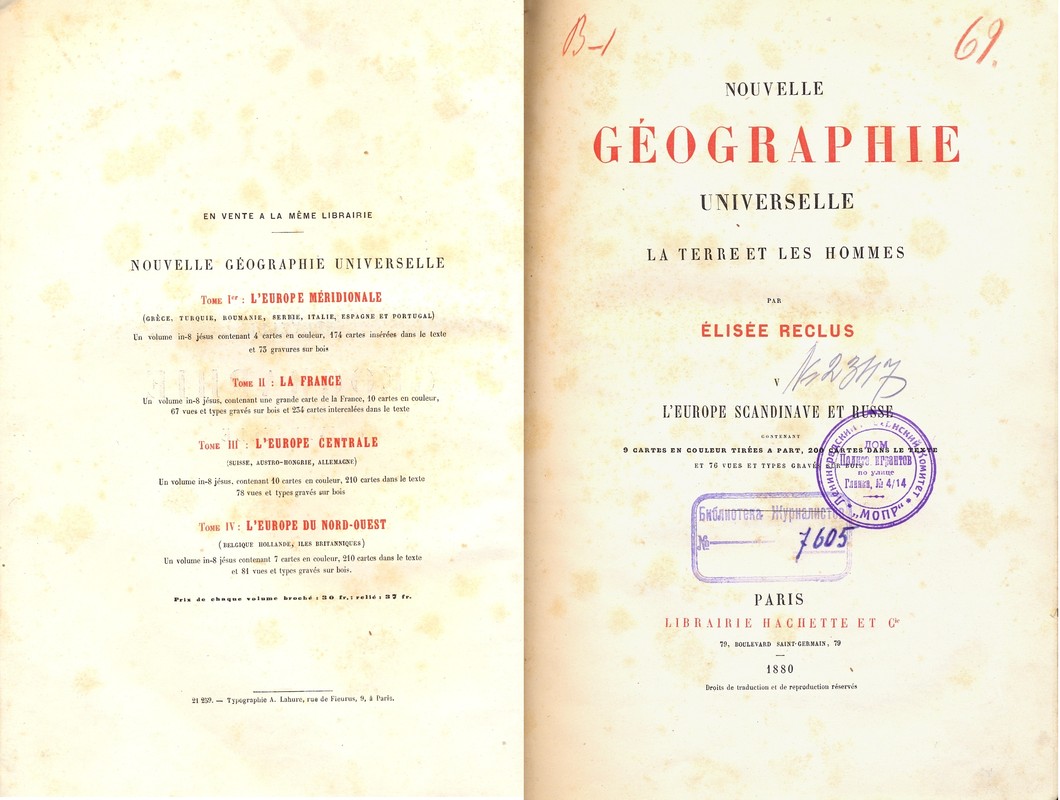 Among the classic works on political economy and management — the work of D. Ricardo and J. C. Mill, "The Subject and method of political economy" by D. Keynes (1899),"The Scientific basis of the organization of industrial enterprises” (1912). The posthumous publication of the main work by Karl Marx - "Das Kapital" (Hamburg, 1893), published at the expense of F. Engels, is quite notable.

The theme of the emergence of capitalism and entrepreneurship in Russia and Europe in the beginning of XIX - XX centuries is  also presented by a number of books.  These are works by R. Kaufman ("Silver ruble in Russia", St. Petersburg., 1910; "Financial economy of local governments in England, France and Prussia", St. Petersburg., 1911 etc.), "Factory industry and trade in Russia" (St. Petersburg., 1896), works by M. Tugan-Baranovsky on the history of factory business ("Russian factory in the past and present", St. Petersburg., 1907)," Russian state credit "by P. Migulin (Kharkov, 1899), "Russian exchange values" 1914-1915, "Joint-stock commercial banks in Russia" by I. Levin (Petrograd, 1917), "Questions of money circulation" (Petrograd, 1918), research-work "Industrial partnerships in France and Germany " (M., 1879),"Beginning of the political economy " by A. Isaev (St. Petersburg., 1905) and many others. 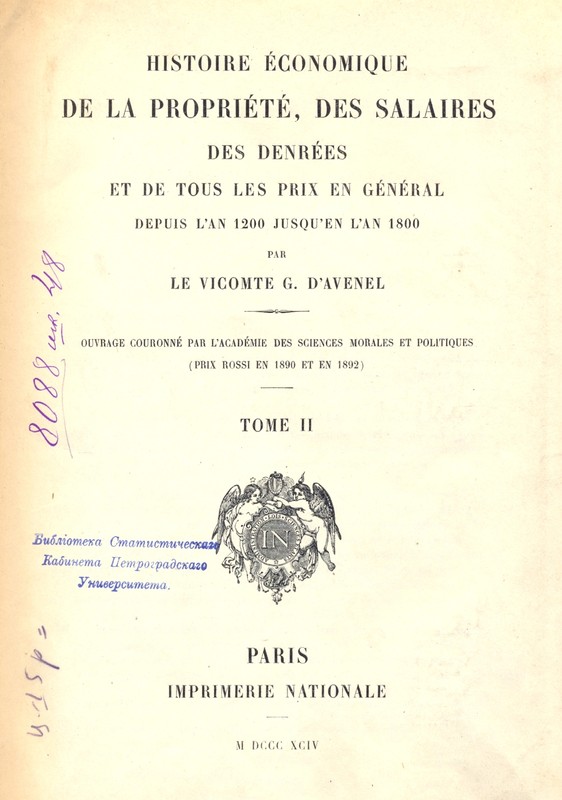 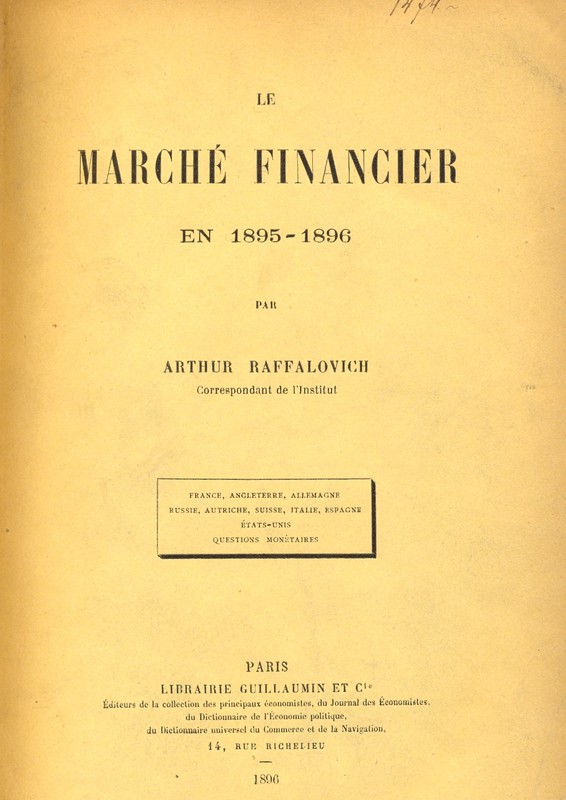 The problems and issues of education in pre-revolutionary Russia are widely covered in such titles as "Historical and statistical review of educational institutions of St. Petersburg educational district from 1715 to 1828" (St. Petersburg., 1849), "The State and public education: an essay on L. Stein's research" (1876), in the journals "Pedagogical collection" and "Pedagogical work".

The history of social and political life of the Russian Empire is reflected in periodicals and almanacs ("Homeland notes", "Russian antiquity", "Moscovite", "Russian thought" and many others). The spirit of the time is reflected in the historical research and works of the most educated representatives of the time, chronicles, historical and literary works. These are "Selected works by N. M. Karamzin" (M., 1984), various historical works by Nikolai Kostomarov and D. Ilovaisky, "Historical, philosophical and sociological studies" by N. Kareev (St. Petersburg., 1899), "The history of social movements in Russia" and "Ideals of Decembrists" by M. Dovnar-Zapolsky (Kiev, 1910). There are some Interesting personal notes and diaries by witnesses of the time – for example, "Notebook of a staff officer during the Russian-Japanese war" by J. Hamilton (SPb, 1906), correspondence of the count Talleyrand with the king Louis XVIII ("Correspondance inedite du Prince de Talleyrand et du Roi Louis XVIII", Paris, 1881), "History of the decline and fall of the Roman Empire" by E. Gibbon (Moscow, 1883), etc. Novels are represented by unique foreign editions in original languages — the works by J. W. Goethe, F. Schiller, W. Shakespeare, V. Hugo, Emile Zola, John Byron and other classics of European literature. The collection of Voltaire's works in French (Paris, 1828) is of a particular value. There are also literary studies of Russian ancient literature ("The words of Igor's regiment", "Novgorod chronicle", etc.). The publication "Picturesque Russia" with beautiful engravings and art history albums are of a great interest. Today the library staff works on a project of cataloguing the Old books collection. This catalog will provide users with access to unique publications of the XIX-early XX century for research and archival work, bibliographic references and the literary heritage of the University and the bygone era.